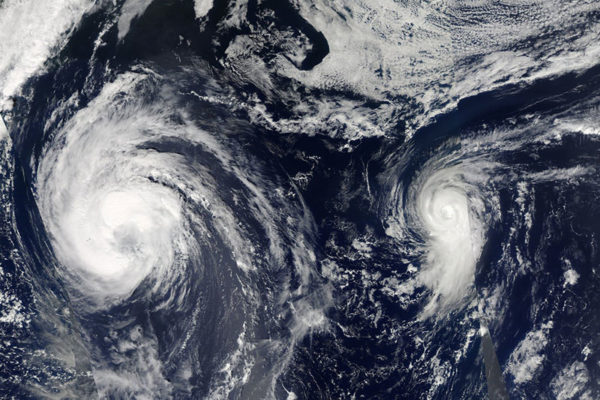 This year’s Atlantic hurricane season should be “near normal,” government forecasters announced on Thursday, with the likelihood of nine to 15 named storms, and two to four major Category 3 hurricanes with winds of 111 miles per hour or greater.

Hurricane season officially begins on June 1 and runs through Nov. 30, with the peak coming in August, September, and October. This week, a subtropical storm, Andrea, weak and short-lived, slipped in — the fifth year in a row that a storm gained enough strength to warrant a name before the season’s start. (Storms generally get named when they reach wind speeds of 39 miles per hour.)

Phil Klotzbach, a research scientist at Colorado State University, said that “this is the first time on record that the Atlantic has had five consecutive years with named storms” before the official start of the season; the previous record of four years in a row occurred from 1951 through 1954, he said. But he added, “I don’t think that there is too much that we can make of this at this point.”

The window for hurricane season is not set in stone, and has been shifted by government forecasters over time, said Brian McNoldy, a senior research associate at the University of Miami’s Rosenstiel School of Marine and Atmospheric Science. Still, he said, “we’re creeping out a little bit more, it seems,” and added, “I don’t think that’s an accident.”

Two main factors shaped this year’s hurricane season forecast. One is the presence of a weak El Niño pattern in the Pacific, which tends to increase wind shear and suppress storm formation; some researchers, including Dr. Klotzbach, had suggested that this would cause the season to have somewhat fewer storms than normal. But there are also predictions of conditions that favor more storm activity, which include warmer-than-average temperatures in the tropical Atlantic Ocean, said Neil Jacobs, acting administrator of the National Oceanic and Atmospheric Administration.

The problem with announcements that try to forecast storm activity, some climate scientists say, is that they tell people what the government can best predict, but don’t give them the information they need most: Will damaging storms hit the coast? “It doesn’t say anything about how many are going to make landfall,” said Suzana J. Camargo, a research professor at the Lamont-Doherty Earth Observatory and executive director of the Initiative on Extreme Weather and Climate at Columbia University. Researchers are trying to come up with more regionally focused forecasts, she said, but that is a “harder problem.”

That means that the annual announcement of forecasters’ expectations for the coming season can be “inadvertently misleading,” said Kerry Emanuel, an atmospheric scientist at the Massachusetts Institute of Technology. “People interpret it as a measure of risk for themselves.” A single powerful storm striking land can be devastating, even in a quiet season, but with the announcement of a quiet season “people let their guard down.” For example, 1992 saw relatively few storms, but one of them was Andrew, which caused extensive damage in Florida and Louisiana and was the most costly hurricane on record until Katrina in 2005.

This year’s hurricane season forecast comes during a period of extreme weather across much of the United States, with extensive flooding in the Midwest and along much of the Mississippi River. Violent storms in the Southern Plains have spawned numerous tornadoes.

While the connections between climate change and tornadoes are not straightforward, the connections to heavy rainfall and to the tendency of some weather patterns to stall are becoming clearer. Jennifer Francis, an atmospheric scientist at the Woods Hole Research Center, said recent persistent late-season California rains, the profusion of storms and flooding in the Midwest, and heatwaves in the southeast are associated with atmospheric patterns that cause weather systems to sit instead of move across the country.

Current temperature anomalies in the North Pacific and Atlantic suggest “it’s likely we’re going to get some blocking patterns setting up this summer,” she said. That could lead to hurricanes that also slow or stop, dumping enormous amounts of rain after strengthening off of the “supercharged battery” of unusually warm Atlantic waters.

The links between hurricanes and climate change are becoming more apparent over time. The overall number of storms could drop, Dr. Emanuel said, because factors like stronger wind shear could keep weaker storms from forming. But a warming planet can expect to see stronger hurricanes over time, and a higher incidence of the most powerful storms. Hurricanes are becoming wetter because of more water vapor in the warmer atmosphere; scientists have suggested storms like Hurricane Harvey in 2017 produced more rain than they would have without the human effects on climate. Also, rising sea levels are contributing to a higher storm surge — the most destructive element of tropical cyclones.

Researchers have suggested that climate change is also causing some storms to intensify more rapidly — which, as a recent study in the journal Nature Communications puts it, “can lead to disastrous scenarios when coastal areas are not given adequate notice to evacuate and prepare for an extremely intense” storm. James Kossin, a climate scientist with NOAA and an author of the Nature paper, noted that hurricanes like Michael, which slammed into the Florida panhandle last year, show the kind of rapid intensification described in the paper, as did Harvey, Irma, and Maria in 2017. However, he added, “trends like this tell us what’s happening in the broader sense and rarely apply to every single event.”

This season’s storm names include Barry, Chantal, Dorian, Erin, Fernand, and Gabrielle, as well as Humberto, Imelda, and Nestor. Should NOAA have underestimated the number of storms, we could see Sebastien, Van, and Wendy.

In the announcement of the seasonal prediction, Daniel Kaniewski, acting deputy administrator of the Federal Emergency Management Agency, encouraged people to prepare for hurricane season by knowing evacuation routes ahead of time, purchasing flood insurance, and having emergency provisions on hand along with a disaster plan in place— no matter how many storms are predicted. As he said, “It only takes one.”