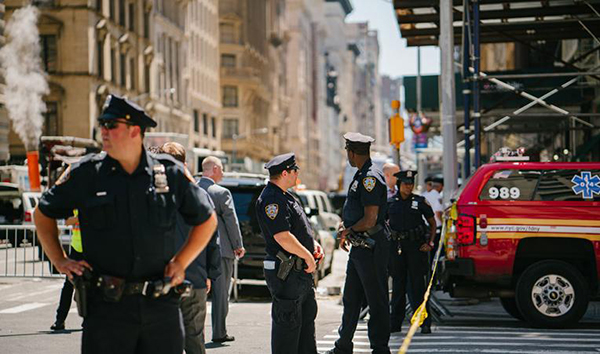 It has been discovered that the Metropolitan Transportation Authority pumped large amounts of asbestos-filled air into an East New York bus depot for decades, exposing more than a thousand employees and possibly high school students (working as interns) to asbestos, the Daily News reported on Monday. Every air vent that services the first three floors of the bus depot – 57 total – were found to be lined with an asbestos-laced cloth, used to make the air vents less noisy by reducing vibrations.

Though the presence of asbestos has largely decreased throughout the country since the 1970s, after the U.S. banned numerous uses of asbestos, it can still be found in older products and materials, as well as new building materials such as pipes and floor tiles that are still made with the hazardous mineral. The bus depot was built in 1947, according to the Daily News, and a large portion of its ventilation equipment can be traced back to then. Asbestos is a naturally occurring mineral made of fibers that when disturbed by being crushed, cut or handled releases particles naked to the human eye that can easily be inhaled and consumed – which makes it a particularly frightening substance and difficult to contain.

Exposure to asbestos can result in asbestosis – scarring of the lungs due to asbestos inhalation, pleural disease, mesothelioma, lung cancer, and other types of cancer, according to the Center for Disease Control. And it can often take many years before symptoms of such diseases are identified. Asbestos Removal can be a costly – roughly $100 - $200 per hour – and time-consuming ordeal. And as concerning as this recent report is, you can find asbestos all over New York City, which has had issues containing asbestos for years. Here’s a brief look at the issues the city has had combating asbestos:

It may surprise you to learn that many of the city’s steam pipes contain asbestos, though the number of pipes that you can find asbestos in is not known. In 2018, a steam pipe burst in the city’s Flatiron district, releasing asbestos into the air, concerning the area’s residents and people working in the area. While the asbestos was cleared from the area, this isn’t the first time a steam pipe has exploded in the city. Similar steam pipe bursts that released asbestos into the air also occurred in 1989, 1994, 1997, and 2007.

In 1993, many were shocked to discover that asbestos was still prevalent in many city public schools, as schools should have been inspected for asbestos following the signing of the federal Asbestos Hazard Emergency Response Act in 1986, which dictates that all schools must inspect for the toxic substance. While asbestos was abated in nearly all 1,069 city schools that were inspected in 1993, asbestos has continued to pop up in city schools. In 2004, two schools – located in Brooklyn and Manhattan – found that they had been able to find asbestos in trace amounts; asbestos was released following a gym construction project in the Brooklyn school, while asbestos was found in plaster that fell from the ceiling in the Manhattan school.

Debris and asbestos littered the streets of downtown Manhattan, following the attacks of September 11, 2001. Though the area surrounding the World Trade Center was cleaned of asbestos and other toxins, those who were exposed to these toxins, such as first responders, have continued to suffer from the effects. Shortly after the attacks, the Environmental Protection Agency told the city that the area around Ground Zero was safe to return to and that people living or working in the area weren’t likely to suffer any long or short-term health effects following 9/11. Though, we now know this wasn’t the case, as nearly 10,000 people exposed to what is known as “9/11 dust” have been diagnosed with cancer.